Various token sales have forced participants to buy in with no bound on the price per percentage share they might pay, or made them race to get in before a cap is reached (high fees, stress, chain congestion, no guarantee of participation, digital scalpers that flip for a quick profit…)

This is a mess. What can we do? Here’s a mechanism that works around these issues.

What if you could say how much of the token you’d like to purchase at each possible valuation? In other words, we could each submit our own personal demand curve. Here’s one that buys in heartily at lower valuations but throws up its hands and says ‘hell no’ if the valuation is over $130m: 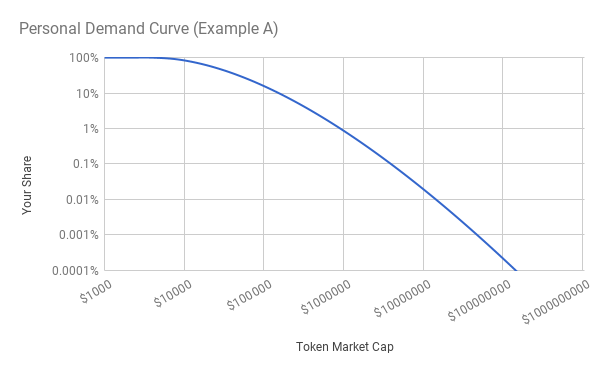 Here’s a demand curve that spends exactly $1,000 no matter what the valuation is (uncapped participation): 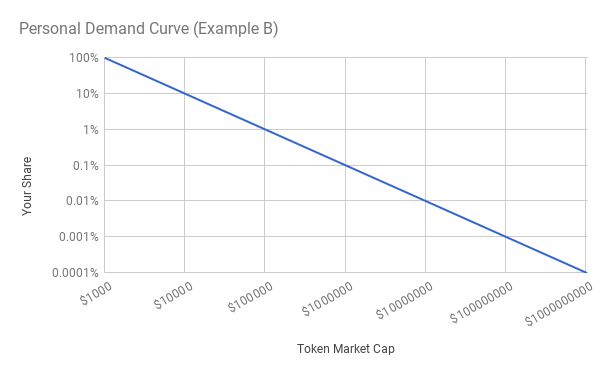 The user interface could let people choose parameters for premade curves, or use control points to design their own. People who don’t want to bother could just send plain ETH to a designated contract that submits a simple curve on their behalf.

When someone submits a demand curve, they include a deposit for the maximum amount they could end up needing to pay. If they end up actually paying less, the difference is refunded. 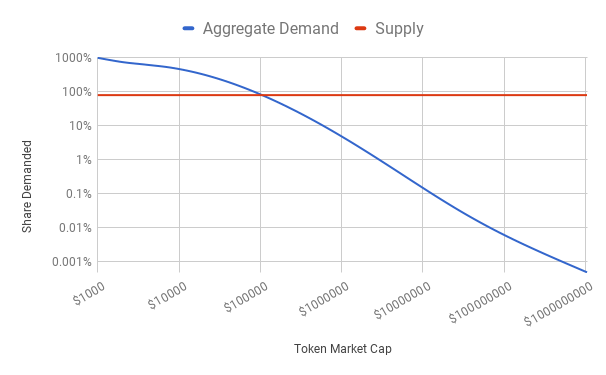 Let’s say 80% of all tokens are being sold off. The intersection of this available supply and the aggregate demand determines the final equilibrium valuation (around $100k in the example). To determine the share a given participant receives, just look up that valuation on their personal demand curve.

In a personal demand curve auction, participants publish their purchasing preference for every possible valuation, and are guaranteed that one such preference will be satisfied.

It turns out that this type of scheme was suggested by Milton Friedman in 1960. He didn’t require submission of the entire demand curve. The US Treasury has since auctioned billions of dollars of bonds using a similar mechanism.

We should think through the best norms for allocating tokens and the proceeds from sales. Getting it wrong provides cover for developers who are merely greedy. (This is what we’re doing now.)

Most new software projects need less than ~$15m in funding for their first couple of years. If a public sale raises a mammoth $200m and the project or developers keep it, it’ll screw up everything we just established. Instead, take anything over $15m and either:

If we can turn these sorts of terms into a norm, then developers that defect are signaling a lack of confidence in their own project, and will struggle to raise money.